No, it’s not a horse race track. Neither is it a literary depiction of something R-18. It has horses though — only that here, you eat them. Seriously.

Kabayoan is an eatery or a carinderia in Dumaguete. It has likely taken its name from its dish that people eat out of bravado or sheer curiosity: the “nilubihang kabayo” (horse meat in coconut milk). It’s a favorite “sumsuman” (appetizer) that, they say, goes best with beer. Although some caution against too much intake of it with alcohol as the meat increases one’s body heat, causing your blood pressure to shoot up. Whether it aids in that different kind of body heat, I can only guess from those who say it’s also an aphrodisiac.

Thankfully, despite the rain and cold weather, our conditions didn’t call for us to get too cozy with the horse for lunch today. Besides,  the thought of eating horse meat makes me weak in the knees. To me, it’s just plain wrong. I admit though that I’ve tried it once many years ago. For those who are curious as to its taste? Like chicken is to snake, horse meat tasted like beef, but much tougher to the bite. 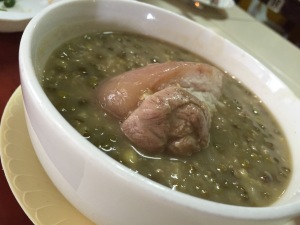 We skipped the horse and went for what a colleague thought was also a sinful choice for me: monggos with baboy (munggo with pork). He said I was heartless for eating my kind. Sheesh. I also had grilled fish. They had “my kind” grilled and some veggie dish.

What’s outstanding about this carinderia is that it serves your food in a matter of minutes. The moment you’re done catching your breath, the food’s already right before you. And as if that’s not enough, they serve free beef-based soup — never mind if your order is also soup (the more, the merrier). 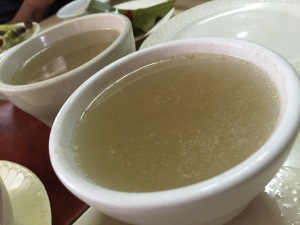 Kabayoan also has excellent customer service. You’re greeted warmly the moment you enter the unassuming place and are presented with a line-up of some 30 dishes in “kalderin” (aluminum containers). Their front-line personnel are in full city health-prescribed gear, and are quick to prepare your table. 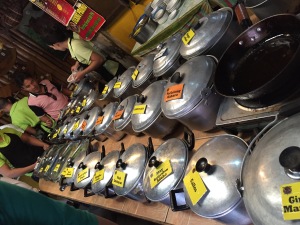 You’ll be amazed at their selection of dishes. It’s as if they want every craving satisfied. Each “kalderin” has a colored tag that tells you what’s inside it. There’s just too many of them that sometimes you end up ordering more than what you had in mind for a meal. They also have several variations to some dishes. There’s munggo with pork, munggo in coconut milk and plain munggo. Their prices vary, depending on the complexity of the dish. Makes sense to me. After all, some want same main ingredient cooked in a different way.

Kaboyoan is located behind the castle-like house at the south end of the boulevard.

No wonder this place has customers from all walks of life. If only you’re not picky, this is a great place to dine. You’d feel at home — and why not? …You’re really inside an old house slightly remodeled to fit the tables and chairs.

Kirby & Hanz. The place is literally in a house with the walls taken down but partitions retained.

Counting by the number of tables, the place can comfortably seat around 80 people at a given time. I fished for information from the waitress but her brilliance was too much for me. I asked for an estimate, and she gave me a Charlene Gonzales’ reply that was close to a “high tide or low tide?” She said it depends; sometimes many, sometimes not too many. When asked what’s the most number of customers they had, she kicked like a horse: “Wala nako gi-ihap, sir.” (I did not count.) Genius. I suspect she holds a PhD in philosophy. 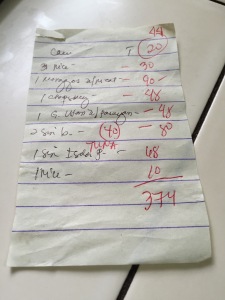 Told the waitress I’m taking a souvenir for Kim Henares

For three people, with orders that could have fed a family of five (not my size), we paid only P374. It’s not completely cheap, nor is it expensive. We could have paid less if only we had a dish each. But as the good old adage goes: man can’t live by bread alone.