There are only a few restaurants in Dumaguete that offer Japanese food. One of them is Don Atilano. This restaurant is more popular for its steaks. A few years ago, it dedicated almost half of its place as a fully Japanese restaurant, which they called Wakagi. But it didn’t take long before they reverted the space to what it was originally: an extension of their steakhouse. Quite recently, that same area is only being used in the evening. When they have an overflow of customers, they open it lunchtime.

What I usually order when I am in a “kimono” frame of mind is their Wakagi bento. It’s a complete meal in a box with many compartments.  I don’t necessarily crave it for its flavor; I just like it for the variety of the food that my eyes feast on. It just appears worth the price you’re paying for it. 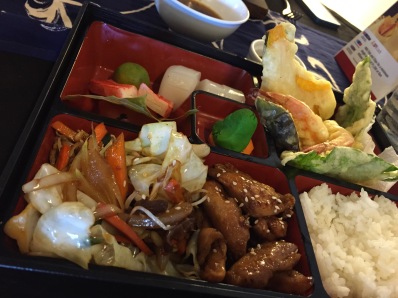 Don Atilano’s bento box has five compartments, each for the following: rice, vegetable and prawn tempura, chicken teppanyaki, assorted sashimi, and wasabi. The vegetable tempura was cooked well; it was neither soggy nor was it oily. The chicken teppanyaki, which was slightly overcooked, was seasoned on the salty side, but it came with a good mix of vegetables, including juicy slices of portabella mushrooms. The assorted sashimi had tender slices of squid and — if only they didn’t run out of it today — generous serving of tuna (which they replaced today with kani or crab sticks?). As always, the wasabi was so-so; it didn’t have that needed kick to the taste. In fact, today’s wasabi looked weird. It’s color was dark green — more like the new color of Spotfiy’s logo on iPhone.

Everything in the bento box is arranged in an attractive fashion that you just have to figure out where to start eating. In my case, there’s no science to my eating — I just pick what I like. 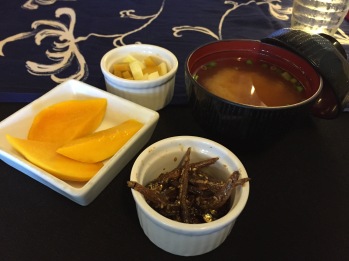 What’s served before the real meal.

When you order the Wakagi bento, it comes with it four appetizers that are brought to the table together ahead of your real meal. There’s miso soup, crispy-fried fingerlings (I think that’s what “tulakhang” is called in English), supposed-to-be pickled (because it lacked the sourness) veggies, and slices of riped mangoes (Maybe the mangoes were for dessert but I ate it along with the rest anyway, so shoot me.). If you’re the type who wants your meal to be on the table all at the same time before you start eating, you can request the waiter to serve them with your box. Or you can always wait for all the dishes to be on the table. 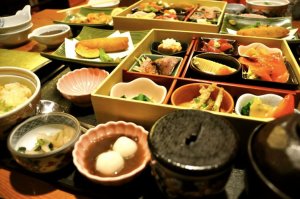 My bento in Toyko

I had the chance to taste an authentic bento meal in Japan. Theirs was huge and had more to offer. While what I had in Tokyo was the real deal, with the attention to detail and splash of gastronomic creativity that the Japanese are known for, I’d give the Wakagi bento of Don Atilano a 3 of 5 stars. For what it comes with, I can’t say it’s a waste of money. It may not be authentic (Who knows? I’m not an expert.hehe) but it’s good enough for the price of P350 (exclusive of 12% service charge) that it’s worth.

Don Atilano is located on the ground floor of the La Residencia Almar hotel. It enjoys a good view of the Rizal Boulevard and the Bohol Sea across it.